We start off our week with The Legacy of Phyllis Tickle with Jon Sweeney , then Donna-Marie Cooper O’Boyle joins us to discuss the Bringing Lent Home with Pope Francis, …Encores of Carl McColman and Vinita Hampton Wright

And  Margaret Felice with our Catholic roundtable! 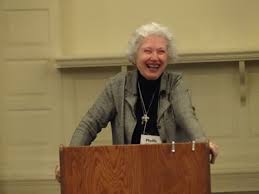 Monday: The Legacy of Phyllis Tickle with Jon Sweeney,  Phyllis will be long considered an authority on religion in America and an active force within religious  publishing for many years in the 1990s. As a contributing editor in Religion for Publishers Weekly and sought after speaker she appeared in Newsweek, TIME, The New York Times, USA Today, CNN, C-SPAN, PBS, and The Hallmark Channel. She has also authored over 40 books, mostly in the areas of spirituality and religion.Considered a mentor and friend to so many, her legacy is a lifetime of encounter. Phyllis died on Sept. 22 2015 at age 81 from Stage IV lung cancer.

Tuesday: Donna-Marie Cooper O’Boyle, is an award-winning Catholic writer, speaker, retreat leader, and host of Catholic Mom’s Café and Everyday Blessings for Catholic Moms on EWTN. A wife and mother of five, Cooper O’Boyle was recognized as one of the Top Ten Most Fascinating Catholics in 2009 by Faith & Family Live. She enjoyed a decade-long friendship with Blessed Mother Teresa of Calcutta and became a Lay Missionary of Charity. For many years her spiritual director was Servant of God John A. Hardon, S.J., who also served as one of Mother Teresa’s

Wednesday: Vinita Hampton Wright is a Loyola Press editor and writer of many books, including Days of Deepening Friendship and Simple Acts of Moving Forward, and she blogs for DeepeningFriendship.com. She has been practicing Ignatian spirituality for a decade and writing about it for nearly as long. She leads workshops around the country on the creative-spiritual process–The Soul Tells a Story grew out of this work. Of her full-length novels, Velma Still Cooks in Leeway won a Logos Book-of-the-Year award, and Dwelling Places was selected by Christianity Today as Best Fiction of 2007. She lives in Chicago, IL, with her husband, two dogs, and two cats. Vinita will be sharing her latest book The St. Teresa of Avila Prayer Book.

Thursday: Carl McColman, is the author of The Big Book of Christian

Mysticism and Answering the Contemplative Call, and his latest Befriending Silence:Discovering the Gifts of Cistercian Spirituality.Carl also writes for Patheos, Huffington Post, and Contemplative Journal. He also has his own popular website and blog devoted to Christian and world mysticism. McColman is a member of the Lay Cistercians of Our Lady of the Holy Spirit, a contemplative community under the spiritual guidance of Trappist monks. A Catholic in full-

time ministry as a retreat leader and speaker, McColman frequently leads workshops and retreats on contemplative spirituality at churches, seminaries, monasteries and retreat centers. He was trained in the practice of Christian contemplation through the Shalem Institute for Spiritual Formation in Washington, DC. He received training in spiritual direction from the Institute for Pastoral Studies in Atlanta. He lives in Stone Mountain, Georgia.

Margaret Felice has been praised for her dynamic stage presence, artistic versatility, and “drop-dead gorgeous voice” (Boston Musical Intelligencer). Her repertoire ranges from classical opera to modern musical theater, from early music to the Great American Songbook, but all of her performances have one thing in common: a commitment to entertaining her audience with musical integrity and creative presentation.