As a witness to the ever growing unrest, poverty and violence in San Salvador, Oscar Romero heard and responded to his calling with holiness and unbelievable fortitude. This biography by Roberto Morozzo della Rocca is extremely well researched and informative on the recently beatified and hopefully soon-to-be saint. So much so, that its author was invited as an expert to the consideration of the cause of sainthood for this passionate shepherd and martyr for the faith. The following are quotes taken from this biography that poignantly speak of the soul of the man who will be forever remembered in the heart of the people. I highly recommend this work as a valuable resource and primer on the life and witness of Blessed Archbishop Oscar Romero.

On Being a Jesuit:

“The Exercises of St. Ignatius [of Loyola] are a personal effort to put Christianity into practice. They are not the great principles of revelation or the magisterium, but the personal conversation with God. ‘I have seen God’ Jacob said. This must be my yearning, ‘Speak to me Lord’”. (p.6) 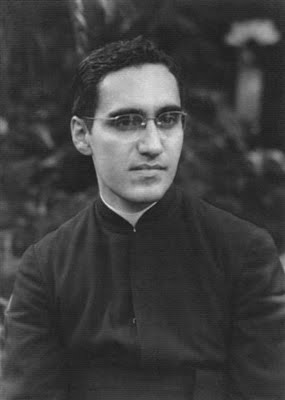 On Being a Priest:

Perhaps it may surprise you but as Morozzo della Rocca affirms- Blessed Oscar Romero was at his core a traditionalist. He proudly wore a cassock, was committed to the Rosary, fasting, examinations of conscience, deep prayer life, supported Opus Dei and had a profound love for the people he served.

On Being a Bishop:

Rather than a supervisory or administrative role Oscar Romero saw the role of a bishop as one who “is essentially a pastor, a father, a brother, a friend. He journeys with other people, sows hope along their path, urges them to seek peace, in justice and love, and teaches them to be brothers and sisters.” (p. 49)

Still accused by some to be a supporter of socialism, he was ardent in his opposition to the separation of the inherent connection between God and man that Communism and Marxism advocated..

“The serious decisive reason why Christianity will always be anti-Communist is above all that Communism denies God and Christianity affirms God” p. 15

“‘Renewal’ the Church has cried, and no one will be able to stop this renewal because the Holy Spirit is blowing… It is not just a restoration of the Church’s prestige, which convinces no one, but a firm and open minded renewal that makes the church appear simpler and more biblical.” (p.22)

“The best thing is to live today more than ever according to the classic axiom: think with the church” (p.23)

“Tradition and progress go together”… “it is not uncommon to come across people who would like a clear decisive break with the past and to meet others who with systematic resistance oppose any form of renewal or adaptation…The conciliar position is a position of integration which brings about a vital synthesis of these two forces, Tradition and liberty.” (pp. 37-38)

What some have called a conversion others close to the bishop described more as a growing awareness to the socio-historical conditions and strength or fortitude to respond to these circumstances out of a deep faith. “Because the Church was faithful to her mission of evangelizing by fostering the conscience of society and by denouncing the injustices and abuses of authority, all these things made the Church the object of persecution…I believed in conscience that God was calling me and giving me a special pastoral fortitude that contrasted with my temperament and my conservative inclinations. I thought that it was my duty to take a positive stand to defend my Church, and on behalf of my Church to stand with my greatly oppressed people.” (p.81)

Romero, as della Rocca observes, was a man of non-violence, of forgiveness not hatred ..and yet equally noted is that at the time.. “neutrality was nearly impossible”. In one of his last homilies he speaks that “ It is time for reconciliation..how irreconcilable they seem the Left’s denunciation of the right and the right’s hatred of the left..those in the middle say let violence come from wherever it may, it is cruel in either case. So we live in polarized groups”. (p. 92)

On Being a Church of the Poor:

“Let us not look for Christ in the opulence of the world, amid the idolatry of wealth amid the desire for power, amid the intrigue of the great. Let us seek God among the undernourished children who have gone to bed tonight with nothing to eat..among the poor newsboys who will sleep tonight in doorways covered in newspapers..The God of the poor has assumed all that and is teaching [us] the redemptive value of human pain- the value that poverty, suffering and the cross have to redeem the world” (p. 114)

Finally, as della Roca observes, Blessed Oscar Romero could have fled but didn’t. Instead, Romero remained “faithful to God and the mission” in the face of certain persecution and death.